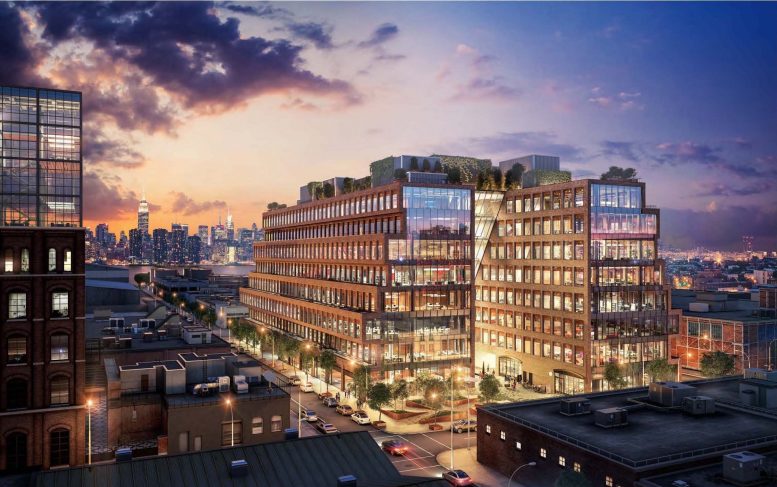 25 Kent Avenue in North Williamsburg, Brooklyn is designed by Hollwich Kushner with Gensler as the design development architect. The eight-story building features a distinctive stepped massing and spans an entire city block, yielding half a million square feet of office space with 15-foot ceilings. The project is developed by Rubenstein Partners and Heritage Equity Partners, who are continuing to fill the property and aim for full occupancy by the middle of 2021. 25 Kent Avenue is the first commercial office building to be constructed in the area in more than 40 years.

Photos from the East River ferry show the exterior. A couple other new projects also stand in the vicinity of the property, including the William Vale Hotel, which rises immediately across Wythe Avenue. The multiple outdoor terraces culminate with a landscaped rooftop.

The development also includes 43,792 square feet of ground-floor retail with 22-foot-high open ceilings for tenants such as Brooklyn Flea + Smorgasburg Winter Market. Two public plazas are diagonally positioned and offset from each other: one at the corner of Kent Avenue and North 13th Street, and the second at the corner of North 12th Street and Wythe Avenue. The two are joined together by a centralized hallway, called The Green Space.

Kith has signed as the anchor tenant and will occupy 57,679 square feet of space and hire around 90 employees. Randolph Beer followed in their footsteps shortly after. The rooftop terrace covers almost 12,000 square feet and comes with outdoor seating, landscaping, and uninterrupted views of the Manhattan skyline. Amenities include on-site parking for 275 cars, 150 bicycles, Tesla charging stations, E-Scooter access using the 25 Kent app, and a fitness center with Peloton bikes, meditation pods, showers, and a bouldering wall.

25 Kent Avenue is bound by North 12th Street, North 13th Street, Kent Avenue, and Wythe Avenue. The closest subway stations are Nassau Avenue on the G train and Bedford Avenue on the L train. The North Williamsburg ferry terminal is less than ten minutes by foot from the address. The 1.8-acre Bushwick Inlet Park and East River State Park are also within close proximity from 25 Kent Avenue.